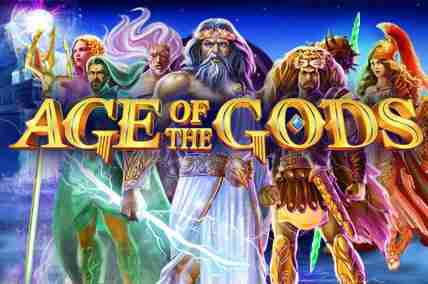 Playtech’s Age of the Gods is one of the most popular online slots out there today. The slot has five reels and 20 paylines, making this one of the better slots in terms of playability. You can play from 20p per spin, giving it appeal to newer online slot players. The game features prominent figures from Greek mythology; Athena, Hercules, Poseidon, Aphrodite, Zeus and finally the villain Hades.

The game has a hugely rewarding free spin system, with free spins rounds occasionally paying out large sums. What type of free spins you are rewarded with depends one which god you pick, each god has a different ability from multipliers up to X5 all the way to 5 possible Wilds on each spin. There’s also the chance of huge progressive jackpots to be won. This in depth review will give you all the information you need to make the choice to play this great Age of the Gods online slot.

As stated above, Age of the Gods offers 5 reels, 3 rows and 20 paylines, giving it a lot of playability. To win, the player must match at least 3 matching symbols on one of the paylines, this changes if you spin a wild, the player must only land 2 symbols if one wild is found, one symbol if two wilds are found and so on.

The slot gives you the option to play from 20p per spin all the way up to £100 per spin, meaning things could get pricey if you’re playing on the higher end of the wager scale. You can use their auto-spin feature where you can play hands free and pick between 1-100 auto-spins.

Age of the Gods is classed as a medium-high variance slot and has a very appealing overall Return to Player (RTP) percentage of 95.02%. The actual RTP of the slot is 94.03%, however, the jackpot contribution is made of 0.99% giving us the overall RTP of 95.02%. This is above average for an online slot, hence the appeal of Age of the Gods.

You will see larger wins when playing the bonus features, in which you get free spins. The free spins feature can land you up to X10,000 your stake, leaving the door open for massive wins. And if you manage to pick Athena as your god for the free spins she can bump that using her X5 multiplier making it possible to land an unbelievable X50,000 stake.

Age of the Gods is a Greek Mythology themed online slot, the game includes many familiar gods each with their own special ability that is used when playing the bonus feature, the gods can be seen below:

The slot is very easy on the eye, set in the clouds with Mount Olympus in the background. The slot overall has a very regal feel, the soundtrack is also a perfect match for this slot. Symbols you will come across in Age of the Gods are A, K, Q as well as a golden gladiator’s helmet, Wild symbol and all of the god’s symbols who are listed above. There is a Wreath Wild symbol which has net you up to X500 your stake.

Age of the Gods is fully optimised for mobile play, meaning you can play on desktop, smartphone and tablet. The overall feel of the game is retained, however the reels change to a more simplistic 5×3 reel system for easier mobile play. Which in our opinion works great when on the move.

When it comes to Age of the Gods you have plenty of bonus features available to you. There is a feature called Pantheon of Power On Reels in which all 5 bonus gifting gods line up and deliver a cash boost up to X10 your total stake.

The main bonus feature comes when you hit three Age of the Gods symbols. You must then turn stones to find 3 of the same god, once three are turned that god gives you your bonus free spins and blesses the slot with multipliers and/or Wilds. However, make sure you don’t turn over three Hades stones because when Hades shows up he will end your bonus feature.

Age of the Gods – God Bonuses

Athena: 9 free spins, Athena gives you a multiplier bonus on each spin between X2 and X5, making the max win from her bonus up to X50,000.

Poseidon: 9 free spins, Poseidon turns the centre reel into essentially a Wild Reel. With the centre reel being only Wild symbols you have the opportunity to win X10,000 your stake.

Hercules: 9 free spins, like Poseidon, Hercules turns the centre reel into a Wild Reel, excluding scatter symbols. The max payout for the Hercules bonus is up to X10,000 your total stake.

Hades: The bonus ends and you will be taken back to the main slot game.

Age of the Gods Jackpot

When you enter this feature you are guaranteed to win a progressive jackpot. The four jackpots are:

Obviously the one to aim for is the Ultimate Jackpot which can deliver a life-changing sum of money. The average payout for this jackpot is £488,000 but has been seen to top £852,000 at one point in 2011.

Age of the Gods is the first of a series of great Age of the Gods slots and is still one of the very best. This game has one of the best potential payouts of X50,000 stake and the added bonus of the jackpot section makes it all the more appealing.

Age of the Gods has now reached cult status and has become one of Playtech’s most successful online slots. If you like the look of Age of the Gods and want to give it a try, you can go to one of our affiliates and claim solid welcome bonuses to give you more to play Age of the Gods with. Check out our reviews of; Slots Heaven, Casino.com and Mansion Casino to claim your bonus now.

Age of the Gods Slot Ratings

A solid online slot game with huge jackpots to be won, and appealing bonus features. With a above average RTP and solid gameplay, it’s hard not to recommend Age of the Gods to players.